Over the last few months, something went wrong with my hair.  I'm not sure what happened, but it had just become more and more difficult to manage.  I consulted hair stylists.  I got a new cut.  I "invested" in some pricey, salon quality shampoo and conditioner.  It seemed the harder I tried to make it look ok, the worse it looked.  I just started pulling my hair up in a ponytail every day because I couldn't do anything with it.  I am way too cheap and way too low maintenance to put a whole lot of effort into my hair.

I should add that most of my life I have had stick straight hair.  However, the older I get, the more waves and little curls I get, especially in the back of my hair.  Odd.  I also should confess that I tend to have dandruff too.  Yuck, I know.  I've tried most of the anti-dandruff shampoos available, with minimal benefit.

Anywho, I had been hearing some about this no shampoo method and I was a little interested.  I read a few websites about it just to get a sense of what it was.  I found this site helpful and interesting.
http://simplemom.net/how-to-clean-your-hair-without-shampoo/

Then I ran out of my $10 bottle of investment shampoo.  So what better time than the present to try it out?

Here are the supplies: 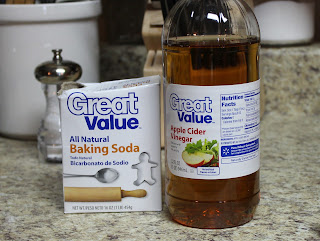 And here's my method:﻿
1.  Use baking soda mixed with a little bit of water to scrub your scalp with your finger tips after your hair is wet.  I read a bunch of different ratios online, but the one I tried first was 2 tablespoons of baking soda to 2 tablespoons water.  I found this too thin.  Now I just eyeball it, putting a little bit of baking soda in a small bowl and sprinkle water on it until it gets like I want it.
2.  Rinse hair out.
3.  Use a apple cider vinegar and water mixture to "condition" your hair.  This ratio I use is 1 part apple cider vinegar to 3 parts water.   I put this is a water bottle and squirt it on my hair.  You are supposed to stay away from the roots of your hair, as this will make it look greasy.
4.  Rinse out.

That's it!  I've been doing it almost three weeks, and I love it.  My hair looks a lot better than it has in a long time! 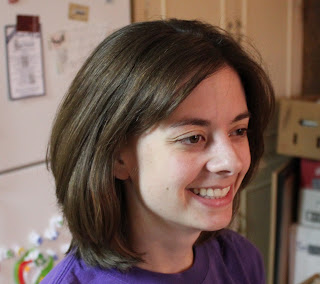 The dandruff is gone, my hair is less greasy and feels softer, and I haven't needed to wash it every day!!  It is super, duper cheap, and gets rid of a few more chemicals in my house.
As far as the ratios are concerned, the general consensus seems to be: do what works for your hair! If your hair is more greasy, use more baking soda. If it is dry, use less.  Or if it is greasy, use less vinegar and make sure to stay away from the roots of your hair.  Some people dissolve the baking soda in water, some people make it into a paste.
The only real downside is it doesn't feel as "luxurious" to wash your hair.  The baking soda/water mixture doesn't bubble or feel smooth over your hair like traditional shampoo.  But it's not a big deal to me.
After a few weeks as your scalp adjusts to having less harse stimuli, you are supposed to be able to stretch out times between washing.  The lady from the website above only washes her hair about once a week.  I'm not there yet, but I could probably go to every third day now.  Some people have a "transition period" where their scalp goes into overdrive with oil production in response for a few weeks, but I didn't have that.  There is a ton of information on the internet about this method and a million different ways to it, and I encourage you to try it out.

Posted by Sarah Blanshan at 11:45 AM 2 comments

Ok, so it's been 4 months since I updated.  Forgive me.

Sometime back in March, we were reaching a point where we just didn't know what to do next.  Time till Bob's graduation was drawing near, and we still had not made a decision about what life direction we were going to go  We had options, but none really were sitting well with us.

Then Bob got an email.  "Maybe come to Louisiana" it said.  "You could fill a need here."  He forwarded it to me.  I read the first line or two at work, sitting alone, and closed it out fast, not daring to read the rest because I knew.  I knew that was where we were going to go.  We had prayed the night before, again, pleading with God to show us what to do, because we were so tired of being in limbo.

We went and visited.  It fit.  We said yes.  I cried a lot.  First for the reality of leaving the family that adopted me, who gave me their name.  I had already left my first family and now I had to do it over again.  Secondly, I cried for the reality of not being an international missionary.  Yes, yes, I know all about "being a missionary where you are" and all that stuff.  But I wanted to go to a land I did not know, to travel, eat strange things, learn a language, to walk with those in true poverty, and work with people who do not think like me.  Now that did not seem like it was to be.

(side-note: I will likely have a whole other blog post about life in Louisiana and how maybe this is a country all its own, but that will have to come later.)

But comfort in God's will prevailed and the tears dried, though they resurface occasionally.  We put our little house on the market.  We planned another trip back to find a new place to live and get a job for me.

I truly job-searched for the first time in my life.  I marketed myself to where there was no job posting.  I came to the conclusion that nurse practitioners barely existed in Louisiana or the market was saturated.  I learned later I was right; I was just one of many NPs.  And it's all about who you know and I didn't know anybody.

We came down for our second visit without much of an agenda, which is not what we wanted.  I had been unable to find a job.  We looked at a bunch of rentals, and saw too many cockroaches for our liking.  Someone mentioned maybe teaching nursing, which I had not thought about.  I found a job to apply to at a university, but couldn't get the fax machine to work for a few days.  Finally, I got it sent off.  We found a place to rent we liked, but it was pretty much already taken unless we could rent it that day.  We still hadn't sold our house.

The day came for us to leave.  We were feeling quite guilty at this point, because the church had paid for our trip down there and we had not accomplished much.  On the way to the airport, we starting thinking it probably would be better just to start paying on the rental house to reserve it.  We would say "Yes" to coming though we didn't know how we would with a house to sell.  The landlady was pleased we wanted it and picked us over another applicant.  We sent a deposit check back with our ride to the airport.  Whew, we had a place to live.

Earlier that morning, I had received a call from the university.  They liked my resume.  We talked in the airport while I was waiting for my plane.  I didn't know much about the job at that point, but they seemed to be offering it to me if I wanted it.  We set up a video interview for later.

We got on the plane.  We started down the runway, but then we stopped.  The pilot came on, saying there's weather in Houston, folks.  He let us turn on cell phones on while we waited for clearance to take off.  A few minutes later, my phone rang, and it was our realtor, saying our house had sold.

Whoa.  In a matter of hours, we found a place to live, I seemed to have a job offer, and we sold our house.  Praise the Lord!  It was as if He was saying, "Come on, take a step in trust, and I will take care of the rest."

Our flight got cancelled completely, and we got to stay another night, to come home to celebrate with our new church family. 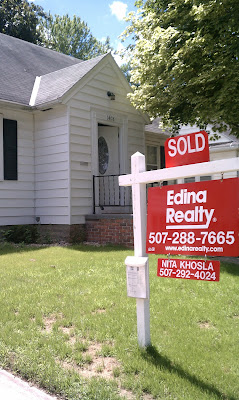 We packed up our house, I quit my job, and those that do not believe thought we were crazy.  But here we are, learning our way around, picking up a few new words and eating a few strange things.  We feel the Lord has led us here, though we do not know His full purposes for us.  But for now, this will be our mission field.