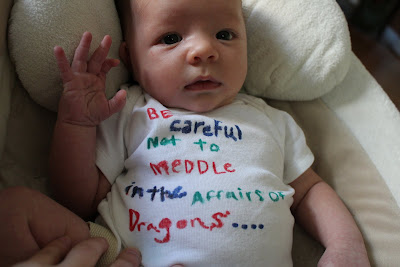 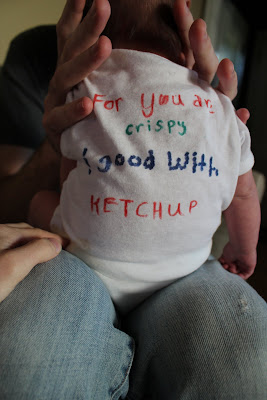 (Be careful not to meddle in the affairs of dragons, for you are crispy and good with ketchup.  -from How to Train a Dragon) 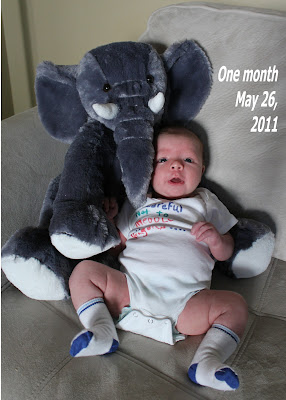 *babble some
*stick out your lower lip so far when you are unhappy
*like riding in the car
*enjoy your playmat, the swing, and the moby wrap--to a point
*like getting your diaper changed
*have been to your first wedding of four this summer
*have been on two long car trips
*are turning into a chubby kid
*go 3-4 hours between feedings
*are pretty interactive and fun when you are awake

Posted by Sarah Blanshan at 10:10 AM 1 comments

Here's the link to the sneak peek version of our newborn photo session.  I am so in love with this girl.  I have probably looked at this album 20 times already.   Enjoy!

Posted by Sarah Blanshan at 10:40 AM 0 comments

I figured I would be a little overdue, as a lot of first time moms are.  I hadn't quite planned on going long enough that most in the medical community would recommend starting labor artifically.  But, alas, that is what happened, and at 41 weeks and 3 days, I went in to the hospital to be induced.

We got there around 7:30am, and it took about an hour to get checked in, meet with the midwife, and make a plan.  I had been having Braxton Hicks contractions for days, but nothing sustained or painful in the least.  When they checked me that morning, I was 2 centimeters dilated, and 90 percent effaced.  A tiny achievement, but not enough to get this baby coming.  So first, we tried a dose of cytotec, which takes four hours to see if it works.  It made my contractions come more frequently and closer together, but still, nothing sustained or painful.   Bob and I just hung out in our room, ate some brunch, watched the movie "I am Sam", and Bob caught a nap as we'd not slept much the night before due to anticipation.  I worked on knitting my baby blanket (which may or may not ever get done).   Four hours later, the midwife checked me again, and we really hadn't made much progress.  Still 2, maybe 3, cm dilated if she was generous.  So we went to pitocin next.

It took a while to get that going as our nurse got busy.  The pitocin started infusing around 2pm.  Since I was being induced, the general guideline is that you stay hooked up the monitor to make sure the baby is tolerating it.  They tried two different portable monitors on me, but couldn't get them to work, so I was relegated to stay in/near the bed.  That was one thing that was so different from what I had prepared in my mind for labor to be like.  I had planned on walking, getting in the tub, using the birthing ball, etc.  But I couldn't.  Not that I was really uncomfortable at all at this point.

The nurse would come in and turn the pitocin up every half hour per protocol.  It took a while for it to have any noticable effect.  But somewhere around 4pm, the contractions really started to intensify.  Somewhere around 4:30pm, they were enough to bring tears to my eyes.  That was another thing that was so different than what I had planned.  I thought I would build up to the labor pains, with them gradually getting stronger and stronger.  Oh, no.  It felt like one minute I was fine and the next minute I could barely see straight from the pain.  At this point, I did sit on the birthing ball next to the bed, still hooked up to the monitor.  Then I started vomiting.  And shaking.  And felt so ridiculously cold it felt like I was outside in Minnesota in January wearing nothing but a swimsuit.  I got back into bed because I didn't think I support my own weight anymore, and they covered me up with warm blankets.  We thought my water broke around this time, but realized later it didn't fully and was probably more of a slow trickle.  Around 5:30pm I was still freezing and having rigors, and they had stopped increasing the pitocin (thank goodness).  It became apparent I really wasn't tolerating it.  So the midwife stopped it completely, and that allowed me to be off the monitor and get into the tub.  My body continued on with labor despite having the medication off.

The warm water felt excellent.  For about 5 minutes.  Then I switched from feeling like Minnesota in January to the Sahara desert in full sun.  I was so hot.  Had to get out of the tub quickly.  I don't know how long the contractions were lasting, but they were very close together.  Maybe 15-20 seconds of rest before the next one started.  At this point, I decided that even though I had hoped to do this without pain medication, I was quickly becoming overwhelmed and it was too much pain too fast and I couldn't keep up.  So I asked for an epidural.

It took a few minutes to get the epidural in place and working appropriately, but when it did, it was glorious.  That was around 6:15pm. I could still feel when I was having a contraction, but it wasn't bringing me to my knees like before.  And with the pitocin off, my temperature started to regulate itself a little better.  I returned to being cold, but I wasn't shaking out of my skin like before.  Warm blankets did the trick now.

The midwife checked me again around this time and I was 6, maybe 7 centimeters dilated.  Progress.  She discovered my water really hadn't broken and we decided to go ahead and rupture the membranes in hopes of bringing the baby down lower.  After she did that, my belly was about half the size it was before.  There was some meconium staining in the fluid, so there was a little concern Bethel would have some troubles when she came out if she had aspirated any of it.  They would have the pediatric team there when she was delivered just in case.  It was shift change for the midwives then, and we changed from Candi to Pat.

Once the midwives finished report, we decided this could be a while since I was not quite 7 centimeters dilated, and I sent Bob across the street to get a sandwich.  He really didn't want to go, but I knew he should eat.  While he was gone, I had the undeniable urge to push.  I told the nurse, and the midwife checked me again even though it had only been a few minutes.  10 centimeters.  Amazing.   The nurse and midwife started getting things ready.  Bob walked in, and they said, "She's ready to push."  His face was priceless.  Needless to say, he didn't get to eat his sandwich right away.

I started pushing right at 8pm.  The contractions were very close together, and I just had time to take a few quick breaths between them.  Bob was awesome.  He was such a supportive, faithful coach.  I was still pushing at 10pm.  The first hour was good, very satisfying, and I had a nice sense of accomplishment.  The second hour started getting tiresome, and though I could tell we were making progress, I was beginning to wear out.  The epidural did a great job of covering the contraction pain, but I was able to feel a lot of the pain from pushing.  It was not quite as painful as the contractions had been, but it was up there. Around 10pm, I asked if they could give me an idea of where we were and how much longer they would anticipate I would need to push.  I had no idea where the baby was.  The nurse and midwife looked at each other and said, "Maybe about another hour?"  I am sure my face dropped.  I was not sure I could keep this up for another hour.

At some point, some of Bethel's hair became visible.  That was fun.  Soon after, I was able to reach down and feel her head.  She was living up to her pet name "Wiggly", as she was turning her head back and forth  when all you could see was the top of her head.  Bob, the nurse, and the midwife thought that was cute.  I, however, did not find it very cute.  Whatever she was doing hurt like crazy.

At exactly 10:30pm, Bethel Lucille Blanshan fully entered the world.  She came out vigorous and crying, so the concern for meconium aspiration became null.   She had the umbilical cord wrapped around her neck twice, but the midwife quickly reduced it.  Bob annouced she was a girl, and they laid my bright-eyed, squirmy, beautiful little daughter on my chest.  I was in love.  She promptly pooped and peed all over me.  My hands were so shaky and weak I had a hard time holding her in place, but the nurse helped me get her to nurse right away.

I was kind of oblivious to all that happened next.  I ended up having a little hemorrhaging, and got some extra IV fluids, a nice bolus of pitocin, and a lot of not-so-comfortable abdominal massage to help my uterus contract.  It resolved without much other action.  By the time we got back to our postpartum room, it was after 2am and we were so tired.  But we had this cute little thing with us that made it really hard to try to sleep.

Bob was great.  So encouraging, attentive, and tireless.  He was so proud of me and of his daughter.  I love that man.

Isn't she the cutest? 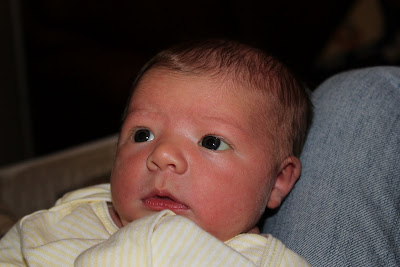 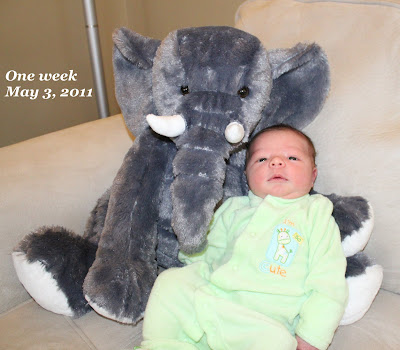