You don't typically see homeless people in Rochester. They are here, no doubt, but you don't normally see them with their signs sitting on a corner asking for help. But one was here recently.

There was this guy sitting on a corner near my apartment yesterday. I thought to myself, "I should help him." But I stalled. I was already late.

I came home down the same highway, and he was still there. "I'll fix him something to eat and give it to him!" I thought. I had another commitment just an hour or two later, and I would be coming back this way again.

A few hours passed and I hopped in the car to go. I was happily oblivious as I drove, then I came to that corner. He was still there. My heart sank.

I had forgotten about the sandwiches I was going to make.

I would have stopped at a nearby Arby's and picked something up really quick except I was cutting it close to be on time to meet my 1st grade friend that I mentor. So I drove on, resolving to stop on my way back. I'd only be gone for an hour, surely he'd still be there.

I came back, searching for him. He was gone. I prayed that God would give me a second chance.

Today, I went somewhere and on my back back, he was there again! Except he was on a weird corner and I couldn't get over fast enough. I was excited as I drove the few blocks home, planning what kind of lunch I would pack him. And I thought I'd call the homeless shelter in town to see if they had an opening and would take him in for the night. I'd give him a ride!

(Do not insert your concerns about my being 'safe' here unless you want a kind lecture from me telling you why I am not going to buy into that).

So I came home, pulled out the peanut butter and bread and my phone rang. I talked and laughed as I took my time making sandwiches, packing apples, and looking up social service contacts online. I got back in my car, and drove to the corner.

He was gone. I sank again. What a hopeless sinner I am. Why had I stalled? Why did I not called my friend back later? Why had I forgotten about him the first time I saw him?

I recently heard a speaker talked about living a life worth living. My take-home message: No regrets. Live like the person you always wished you were, loving people into God's kingdom.

I failed. Jesus waved to me from a corner, and I waved back, wishing him well, but not doing anything. I'm going to carry those sandwiches and apples in my car for a day or two just in case I run into him. And there will be no regrets next time. 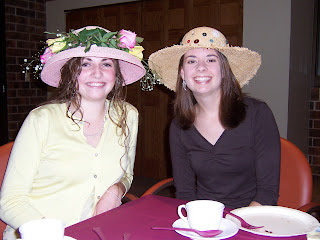 This has the potential to be very girly, so beware...but I want to share a few fun things from the last couple of weeks.

My dear friends Kim and Rob were married a few weekends ago. Prior to the wedding, we had an English Tea themed shower for Kim. Everyone was invited to wear a hat, with prizes going to the most beautiful, most creative, and most unusual.

I won most creative by sewing a ton of old fashioned buttons on a straw hat. I inherited a Mason jar of buttons from my great-grandma, and I'm finally putting them to use! 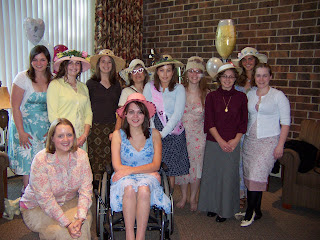 So I'm super-proud of my roommate for this one. Lately, several of her friends and relatives have seriously struggled with eating disorders. More have dangerously low self esteem. It is a very real, very damaging problem. So she decided to do something to spark some healthy attitudes and behavior. In her fun-loving spirit, she threw a party, inviting a small group of girls who live with these issues to have fun together, talk honestly about this, and encourage each other in developing healthy attitudes.

This is what greeted you on the door to our apartment last night. Posted all around our apartment were inspiring quotes and anecdotes that people could read as they wished. Each girl was given a notebook with their name on it, and throughout the night everyone was given the chance to write in everyone else's book something beautiful about them, physically or about their personality. Each person was encouraged to keep that notebook and continue adding to it more things they found beautiful about themselves or about life. Apparently someone thinks I have cute ears. Who knew?

After some dinner (pizza and salad, its all about balance...), we had a trivia game that included questions about current statistics of eating disorders, self-image, etc. The three competing teams were the Hotties of 26th Ave, the Buttless Beauties, and Tres Amigas. (Lol). A few shockers from the game: 80% of 13 year olds have attempted to lose weight and 5-10% of anorexic women will die within 10 years of the onset of the disease.

After trivia, we had a craft. Each woman got a pack of letters and a pretty stationary paper with the goal of unscrambling the letters and creating a positive phrase. If they wanted, they could write a little contract with themselves on the back about having a positive self-image. Here's a few finished products. 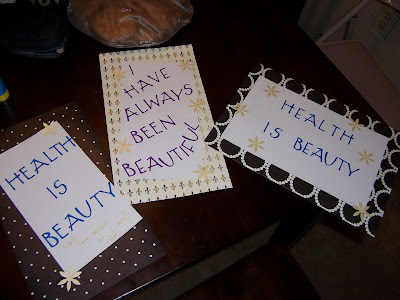 Then we watched a funny movie that dealt with having a healthy self-image, during which I had to leave to go to work. All throughout the night, anytime someone started to say something negative about themselves, they were immediately cut off and others replaced their words with positive comments. It was really encouraging, and I have no doubt it will make a difference for the gorgeous women, even if it is the first step towards health.