"Do not spoil what you have by desiring what you have not; but remember that what you now have was once among the things you only hoped for." -Epicurus

Here are some "signs of life" I am thankful for this Thanksgiving.

*Spots of exploded permanent marker on the new hardwood floors (and walls and couch, ha) that happened during a 24 hour prayer
*A minor ding on the car that occurred while I was parked chatting with the boy
*Crumbs on the counter and dishes in the sink from all the good food I have
*Piles of research work from my opportunity to go to grad school
*Dirty laundry that once kept me warm
*A Bible with water-damaged pages from a camping trip
*Dark circles under my eyes from sleep deprivation from the plethora of fun things to do
*Friends who wake me up to come join them for breakfast, welcoming me showerless and in sweats
*The emotional exhaustion and lability after spending a weekend offering comfort and companionship to a traumatized family
*A messy, uncoordinated art project gift from a kid whose mom is in jail
*A charge for overuse of my cell phone minutes from talking to my family
*An out-of-tune piano to play

The wedding will be June 13, 2009 in Rochester, MN unless someone brings up a major conflict with that date in the next few days. 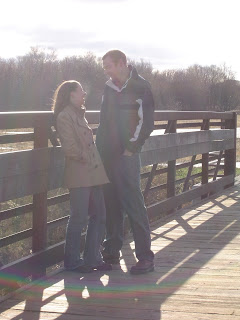 Thanks to a great future sister-in-law, I was able to post the proposal video on here! See the previous post. 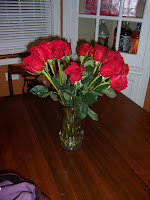 At 6:15pm, he showed up in coat and tie, holding a bunch of gorgeous red roses, and a tub of mystery items that he wouldn't let me see. After getting the roses in water, we went out to Victoria's Italian Restaurant, a nice little place where we went on our first date, exactly 7 months before. We chatted and ate, and it was very nice.

We headed back to my place, because he said we were going to watch a movie. This is where I got a little sad. I had been hoping he would propose to me but trying not to predict, but now it was seeming like this was just another regular date, slightly more formal because it was our 7-month anniversary. He had been quiet and solemn during and after dinner and we had not really talked about anything out of the ordinary. So, I just sat back, told myself to stop being dramatic, and to be grateful that we had a whole night together during a season where our time has been short. But I admit, I was a tiny bit sad. He was not going to propose to me.

We arrived back at my house and things changed. He went down to my basement and pulled out the tv to watch this movie. Before it started, he read me a journal entry he had written back in February before we started dating. He started the movie, and from that point on, I was enthralled.

The intro started with an old home video of him when he was 3-4 years old, singing this funny song about boys and girls hugging and kissing. Then it transitioned into a different form, starting with an alarm clock going off and him talking to me. He was applying for a job--the job of being my husband. The footage showed him getting ready, pep talking himself in the mirror, trying on 5 different shirts, as if he was preparing for a big interview. He named off some of his strengths and qualifications, and how he was the right one for the job. And of course, as with any application, you need to have good references, and his were most excellent.

He had dozens of our friends, his family, co-workers, and random people on video telling me why I should marry Bob. It was AWESOME. I was completely speechless-I only had the occasional laugh and intermittent tears. There were so many people on there who are critical to us. His grandfather read a poem about us. His siblings all wanted me to be in the family. My favorite kid from church told me he wanted to be just like Bob when he grew up. My best friends were there telling me how great Bob and I are and how he was going to make me laugh for the rest of my life. People from different states and foreign countries had sent in videos to support the cause. I still cannot believe everyone kept it a secret and I didn't have a clue.

This boy is a keeper.

I sat stunned for a minute before I could accept his proposal. He pulled out a beautiful ring. We had the best time the rest of the night, ending with a kneeling prayer searching for God's protection and guidance in the years to come.

Years to come. Wow. That is crazy to think about-that I finally know the man I'm going to marry. And I'm so excited about a lifetime with him. 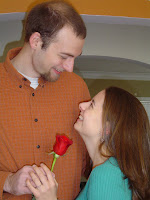 Posted by Sarah Blanshan at 9:38 AM 8 comments

Sometimes in life, there are no words. But, alas, I will try to use words (and the occasional picture) to convey what has transpired over the last several weeks.

Bob has always been a romantic and has always doted on me, surprising me from time to time with sweet, thoughtful gifts and actions. However, a while back, he stated he wanted the next few weeks to be "spectacular," and they most surely have been.

It started with random little gifts, usually left in curious places for me to find, 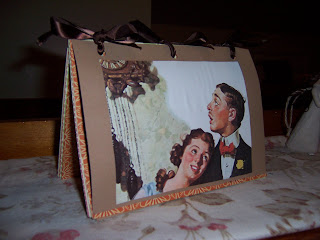 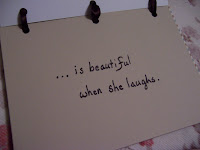 likes about me on every page. 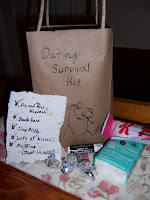 Or this "Dating Survival Kit" filled with items relating to our many inside jokes.

Next came "a dozen I-love-yous", which were in the form of little yarn flowers specially made by a nursing home resident he works with. 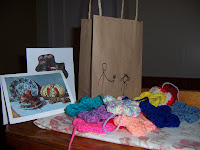 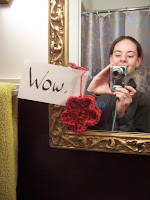 work, some attached to little cards with messages.

The day before I was to leave town for a conference, he gave me a journal in which to keep notes on all the little things I'd want to tell him when I got back. On the front of the journal, he wrote, "This journal belongs to Sarah Dill. This girl belongs to Bob Blanshan."

While I was out of town for four days, I was not to be forgotten. He made arrangements with my best friend Amy to give me little notes from him, one in the morning and one in the evening. They were the cheesiest, cutest things you can imagine, and they made me laugh and feel extra special.

The following days brought more cards and special attention. On Tuesday, he left a bottle of wine, some love songs on cds, and a "to-do" list for me to find. The to-do list was for Wednesday, and it included things such as placing the wine in the refrigerator, dreaming of tall, sappy guys, picking out something formal to wear for the evening, and being ready to go when he came at 6:15pm to take me to dinner.

I'm pretty good at following directions, so I did as I was told and waited for a tall, sappy guy to appear.