I just got this email update from the missionaries in India I worked with in January. This, my friends, is what fills me with peace and joy, and it is my purpose in life. My part in this story is so small it is almost not worth mentioning, but this story God is writing is bringing glory to him and bringing others into his kingdom here on earth and for all eternity. He can use even haphazard, ineffective clinics like the one I took part in as an opening paragraph to yet another chapter in the greatest story ever told. Enjoy, and thanks to all who helped me take part. It means so much to me when you understand that "I have but one candle of life to burn, and I would rather burn it out in a land filled with darkness than in a land flooded with light" (John Keith Falconer)

Yesterday was a GREAT day.

About 1 month ago 2 nurses from the states, our two Edge girls and myself did a small medical clinic in a village about 35 miles from our city. The event was done on the doorstep of the Imam's house (Muslim pastor). Yesterday a team of 4 Americans and I returned to the same village to dedicate a new church and four Christian men to the Lord. All of them are new believers and will be baptized in a week or two. This is the first church ever planted in this village, a place that 5,000 people call home.

Of course, my two small trips to the village did not do a great deal to start the church. However, God has allowed me to spend a lot of time working with a MBB evangelist who lives in that area and through his testimony, four men came to faith. 1 or 2 of them will lead that church. Incidentally, two of the four men who were dedicated yesterday join us for the big distribution we did last month.

I can't begin to tell you how happy this makes us. Playing a role in The Kingdom, regardless how small, is a great feeling. It is moments like this that bring a deeper meaning to "Who am I Lord…"

Thank you for praying,

Many Faiths, Many Journeys 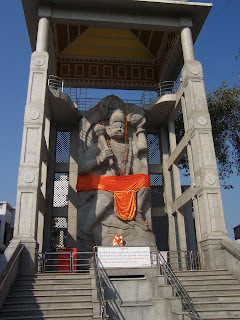 This slogan "Many Faiths, Many Journeys" was posted on many billboards and postcards throughout India. I found it catchy, but kind of harrowing at the same time. At times, the stats below and the reality of the human situation was almost overwhelming. But it was encouraging to meet a few faithful Christians, all of whom had been beaten, disowned, or severely persecuted for their faith.

Everyone you looked was an image of some deity or a makeshift altar. The stories of idol worship found in the Old Testament came alive right in front of me. Many rickshaw drivers had a picture of their personal god taped to the front of their vehicle. Flowers offered to images of stone lay randomly scattered around town. Every 100 yards, there seemed to be another temple, some large, like the monkey temple I've pictured here, and some small, like the picture below.

I am so grateful for grace, for the fact my God is alive, and that he is good. Which reminds me of a very relevant conversation between Lucy, Susan, and the Beavers..... 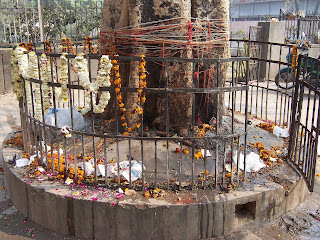 “Aslan a man!” said Mr. Beaver sternly. Certainly not. I tell you he is the King of the wood and the son of the great Emperor- beyond-the-Sea. Don’t you know who is the King of Beasts? Aslan, he is a lion – the Lion, the great Lion.”

“Ooh!” said Susan, “I’d thought he was a man. Is he – quite safe? I shall feel rather nervous about meeting a lion.”

“That you will, dearie, and no mistake,” said Mrs. Beaver; “if there’s anyone who can appear before Aslan without their knees knocking, they’re either braver than most or else just silly.”

“Safe?” said Mr. Beaver; “don’t you hear what Mrs. Beaver tells you? Who said anything about safe? ‘Course he isn’t safe. But he’s good. He’s the King I tell you.”

Amen. He's the King, and he is so good, even when he's not safe.

There is no good way to sum up India. The only manageable way I can think to do this is through pictures. For the next couple of posts, I'm going to pick a few of the most telling, and say a few words about what I thought and felt over these last few weeks. In some ways, I'm still processing and somewhat reeling from it all. 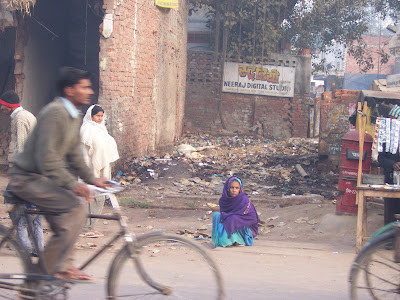 When I glance over all my pictures, this is the one which draws my eyes over and over again. I want you to make it larger if your computer will let you and take a good look at it. It says so much to me.

The woman in the middle is the embodiment of the old India. She is just hanging out in the traditional pose many use for waiting, working in the fields, going to the bathroom. I imagine she was like that because it was the warmest, most comfortable way she could be while waiting for whatever she was waiting on. Her clothes, though old and dirty, are still made of the bright, flowing, modest fabric donned by most women. I wouldn't last 30 seconds in that position. There is no telling how many hours of her life she has spent that way.

Notice the relatively small trash pile behind her, with every bit of anything valuable picked out of it as a way of making a living for many people. There is a dead cow lying near the wall. At least it wasn't a dead person, which I also saw sprawled out on a sidewalk, but didn't have the time or the audacity to take a picture of.

Now, in defense of India, I'm not for sure the guy was dead. But judging by the contortion of his limbs, his disheveled clothing, and the blotchy color of his legs, it is a pretty safe guess. How long had he been there? How long would it be before someone removed his body? What does that say about how valuable a life is in India? How many more people are there just like him--dead, or nearly so--while the rest of the world rushes on?

Back to the picture.

Bicycles are everywhere. Cycle rickshaws are one of the cheapest forms transportation. It is the best way to see what all is around you. The bad thing is that it is also a great way for everyone to see you, especially if you are the rare white person. Instant entertainment for the whole community. Little wooden shops that sell all sorts of items or services are lining the streets, right next to gigantic brick or stone buildings that have been there for centuries. You can get a haircut, a pack of gum, a kilo of fruit, and a pirated movie probably on the same block. And at India prices with an American checking account, it is so tempting to not do it.

One of the Best Things about Nursing

I find it funny that I am writing this now considering my last post.

But nevermind. One of the best things about nursing is that you are qualified to do so many things. The options are almost unlimited. You get tired of one area, you go to another. And for people like me, people who thrive on change and learning new things, this is a serious plus.

Starting next weekend, I will no longer work in adult general medicine/nephrology. I will work in the pediatric intensive care unit at the same hospital.

This was a huge decision for me. Because of the intense orientation program I need to complete, I was told I would not be able to continue graduate school and do this new job. So I needed to pick. I chose to delay school for a year to do this. I don't know if it was the right decision. I had planned on getting through school as quickly as possible in order to go on with my real dream: serving the Lord internationally somehow related to health care. But I feel good about it now that the 'down year' is halfway over. But I found out later that I had to take one class to keep my spot in the program, so I am still doing school and orientation, just not as much school as I would have.

I'm excited to work with younger ones and their families. I love working with crisis situations, and when parents have a kid in the PICU, they are scared out of their mind. I love teaching and helping people understand what is going on, so I think this will be a good fit for me. Plus, not that I have learned everything, but I feel stagnated on my current unit. I need a change. So here we go.