Last weekend I was in Arkansas; this weekend I was traipsing around Minnesota. Bob (my boyfriend, for the two of you in the world who don't know) and I set off Saturday afternoon to take advantage of a few days off and go visit some important people. We headed up to Madelia to see his delightful grandparents (the elder Bob and June Blanshan) and neighboring Aunt Barbara and husband Paul. We caught the tail end of a graduation party for Paul and Barbara's foreign exchange student, but really just enjoyed good time visiting family.

After staying the night with Bob's grandparents, we got up quite early to make the trek up to Baxter, where Bob had been invited to preach this Sunday due to their preacher's absence. He did a great job getting everyone fired up about the joy of our salvation, then we had the all-hallowed potluck fellowship dinner. It was so good to meet all of those people I had heard 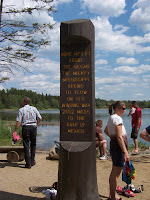 about so much and to see where Bob had spent two years of his life ministering.

We had plans to go to Bemidji from there for Sunday night service, but found ourselves with a few hours to spare. So we decided to take a little detour not far off the original path and make a visit to Itasca State Park, home of the headwaters of the Mississippi. To make it even better, it was a free day at the park! I can now say I've seen the Mississippi at its beginning and end, with several places in between.

We enjoyed our time there, minus the mosquitoes that seemed to like me better than him. Minnesota is such a beautiful state. Cute little towns with cute little churches and cute little shops are around every corner. The only place you'll say the word 'cute' more is at a baby shower. The scenery is at times breathtakingly 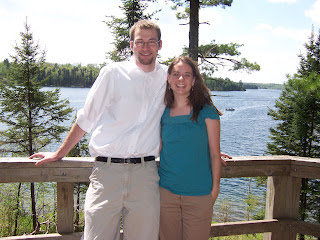 beautiful, especially up north where the roads get curvier to go around all the lakes, and especially during the summer.

After leaving Itasca, we headed towards Bemidji to visit Bob's best friend and his family and the church there. We incidentally met up with another aunt, Suzanne, who happened to be in the area. 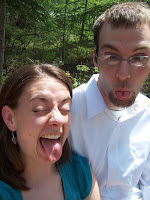 After dinner with some church members (thanks again, Luke), we went to the Williams' house for a brief time of fellowship before bed. After breakfast, we were southbound back to Rochester.

So the consensus is in that we are pretty much a really cute couple. I can't think of anyone else I'd rather explore Minnesota with. Be very jealous.